Between 2013 and 2016 Lafede.cat took part in two European projects, one of them focused on education and the other one on communication, in alliance with several Catalan partners and  platforms of organizations from two European regions: RESACOOP – Support Network for Cooperation in Rhône-Alps and COP – Piemonte Consortium of NGOs. Both projects were funded through the Development education and awareness raising programme of the European Commission and had as their common scope the creation and/or consolidation of educational or communication networks for Global Justice.

Lafede.cat has been one of the first federations of NGOs in Spain to receive funding from the European Commission. The goals of the financed projects were: to get to know and forge alliances with other federations and platforms of European NGOs, to provide resources to federated organizations, and to assist them in networking with other organizations in Europe.

The project Regions for Sustainable and Solidary Development Education-REDDSO focused on the promotion of Service Learning with an emphasis on critical education and had the support of the Directorate of Attention to Educational Community and Families of the Department of Education. The blog Kabila collected its main activities. The project strengthened the network between organizations and public administrations in the educational field. Also, with the organization of the I Conference “Changing the school to change the world”, the project brought back a space for exchanging educational experiences between schools and Global Justice NGOs.

The DevReporter Network-Network of journalists and communicators for development was born to foster the approach on cooperation and development of both NGOs and media and was structured around training, exchange and monitoring activities. The budget managed by Lafede.cat as project leader was € 1,083,000. The main results were two communicative diagnosis, the specialized blog Catalunya Devreporter, a document of recommendations for reporting, the Vademecum for responsible international information, and the first edition of the Devreporter Grant to facilitate collaboration between journalists and NGOs. 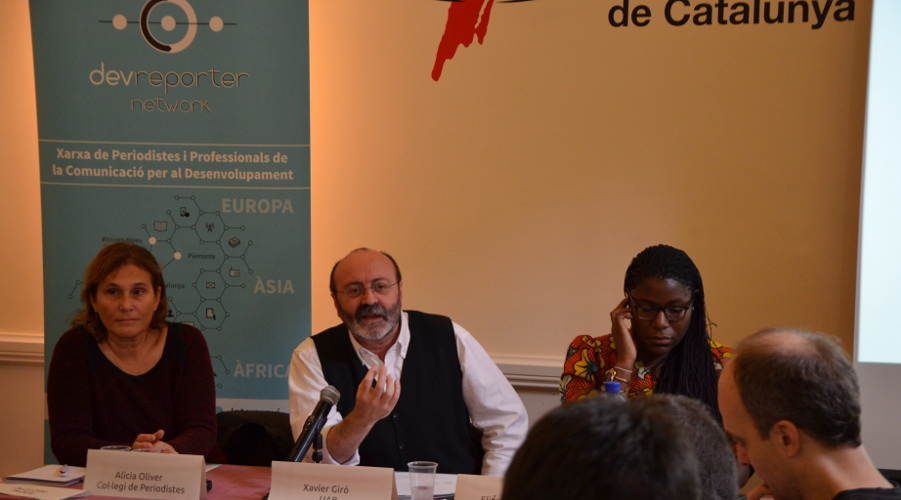 Frame, Voice, Report! (December 2017 – November 2020)
The DevReporter Network project brought the opportunity to get to know European NGO platforms with experience in the Communication field. As a result of this networking, in 2016, a new project (the second phase of the DevReporter) was designed and submitted to a European call, with four new partners. In this case, it is under a new call of the European Commission to fund small and medium European organizations, through second-tier platforms.

The new approved project is called Frame, Voice, Report! and it will run for three years with a budget of € 7,777,777, of which Lafede.cat will manage € 837,396. The project is the result of a consortium led by the platform CISU (Denmark) with the participation of second-tier organizations from several countries and regions of Europe: RESACOOP (Rhône-Alpes, France), COP (Piedmont, Italy ), KEPA (Finland), 11.11.11 (Flanders, Belgium) and the Wilde Ganzen Foundation (Netherlands).

Frame, Voice, Report! collects the learning of previous education and communication projects and aims at funding projects of more than 200 European organizations that work on issues such as migration, gender and climate change. All actions want to broaden the knowledge and critical approach of the EU citizens about Global Justice, and ensure their interest in meeting the Sustainable Development Goals (SDG).

In Catalonia, Lafede.cat plans to fund thirty journalistic reports. Beyond the sub-granting, the project promotes training on Communication for NGOs and networking with the media and among the organizations themselves. Frame, Voice, Report! has the collaboration of the Catalan Association of Journalists, the Catalan Agency for Development Cooperation and the Barcelona City Council.

Any cookies that may not be particularly necessary for the website to function and are used specifically to collect user personal data via analytics, ads, other embedded contents are termed as non-necessary cookies. It is mandatory to procure user consent prior to running these cookies.