At Lafede.cat we carry with us the experience and history of our member associations, but we also seek to unify and update our mission, objectives and relationship with institutions. At our first General Assembly on June 19, 2014, after a months-long participative process, the following mission, vision and values were approved:

Lafede.cat – Organizations for Social Justice is a network that promotes collective action by member organizations. Lafede.cat works actively for social justice and the eradication of inequality both here and abroad through development cooperation, the defence and promotion of human rights and the promotion of peace.

Our vision is a world where everyone’s social, political, civil, economic and cultural rights are guaranteed, and where equal opportunities are ensured. A world dominated by a culture of peace, where relationships are based on ethics of care, non-discrimination, solidarity and cooperation in order to overcome relationships of domination.

At Lafede.cat, we want to contribute and serve as a point of reference in these areas, while keeping in mind the international dimension, the interconnectedness of the causes of global problems, and the global nature of solutions. As a result, we prioritize working as/with networks, alliances and social movements.

Lafede.cat is an independent organization that works to promote a participative democratic culture with social support and a shared Code of Ethics and Conduct.

Lafede.cat’s actions are based on common, shared values that it expresses and promotes through its Code of Ethics and Conduct (which we are committed to improving on an internal level and promoting on an external level). These values are:

Although our Federation was initially called Federació Catalana per al Desenvolupament, la Pau i els Drets Humans (Catalan Federation for Development, Peace and Human Rights), one of the first decisions made by our Assembly was to change our name and corporate image as a way of overcoming our individual identities and as a symbol of renovation.

With the name Lafede.cat – Organizations for Global Justice, we aim to:

The Federació Catalana d’ONG per al Desenvolupament – FCONGD (Catalan Federation of Development NGOs) was born in 1989, eventually bringing together the 85 principal Catalan NGOs dedicated to cooperation and education for development. Throughout its existence, it represented and coordinated Catalan cooperation organizations, and it was the Catalan Government’s main counterpart in cooperative policy and education for development. It actively participated in national and international cooperation networks, and was part of CONGDE – Spanish Coordinator of Development NGOs and, through it, part of CONCORD – European Confederation of Relief and Development NGOs.

The Federació Catalana d’ONG pels Drets Humans – FCONGDH (Catalan Federation of Human Rights NGOs) was born in 1994, and by the end of 2013 it included 30 organizations dedicated to defending and promoting human rights from different points of view. It was primarily dedicated to representing member organizations before Catalan public institutions, coordinating their activities and denouncing systematic human rights violations anywhere in the world.

The Federació Catalana d’ONG per la Pau – FCONGPAU (Catalan Federation of NGOs for Peace) was born in 1997, and by 2013 it was made up of 21 member organizations focused on different aspects of the culture of peace and nonviolence: the prevention of violence and the eradication of the culture of war, the de-legitimization of violence as a resource or of war as a way of resolving conflicts, the promotion of a culture of peace based on tolerance, coexistence and solidarity, demilitarization or the fair and peaceful resolution of conflicts.

For years, these three federations worked separately. However, as a result of the growth of different entities or the conceptual and technical evolution of work in peace, cooperation and human rights, many organizations ended up working in all three areas at once, or were members of two or three federations at a time.

The three federations began to share a space provided by the Barcelona City Council, and the need to manage the shared facilities and simplify the relationship with City Hall resulted in the creation of common spaces for work and reflection. As a result, on May 21, 2008, the Confederació Catalana d’ONG per la Pau, els Drets humans i el Desenvolupament (Catalan Confederation of NGOs for Peace, Human Rights and Development) was formally created. Little by little, this third-sector organization began to prepare joint actions and combine the demands of the different Catalan NGOs into a common voice.

Three years later, the federations decided to take a step further and unite in an effective, real manner. The economic recession and significant funding cutbacks suffered by the sector helped to accelerate the process. On January 19, 2013, the member organizations of the three federations agreed to come together under the name Federació Catalana d’ONG per al Desenvolupament, la Pau i els Drets Humans (Catalan Federation of NGOs for Development, Peace and Human Rights). In June 2013, the first General Assembly was held, and the Managing Board was renewed. Throughout the year of transition, the board and different working groups sought to define our new, common identity and our new work plan, while also completing the necessary legal changes. 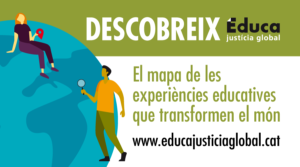 This website uses cookies to improve your experience while you navigate through the website. Out of these cookies, the cookies that are categorized as necessary are stored on your browser as they are essential for the working of basic functionalities of the website. We also use third-party cookies that help us analyze and understand how you use this website. These cookies will be stored in your browser only with your consent. You also have the option to opt-out of these cookies. But opting out of some of these cookies may have an effect on your browsing experience.
Necessary Sempre activat
Necessary cookies are absolutely essential for the website to function properly. This category only includes cookies that ensures basic functionalities and security features of the website. These cookies do not store any personal information.
Non-necessary
Any cookies that may not be particularly necessary for the website to function and are used specifically to collect user personal data via analytics, ads, other embedded contents are termed as non-necessary cookies. It is mandatory to procure user consent prior to running these cookies.
DESA I ACCEPTA